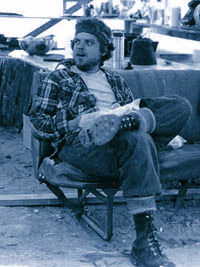 Childhood: I believe the rights of children should be protected and their histories kept discrete. With the advent of the computer age and the massive information transfer which the internet engenders it is even more important to grant children permission to be children and not subject them to the spin-doctoring and marketing required of our later careers and public presence.

No-so-recent History: Graduated 1979 with a Phd in Molecular Biophysics from Florida State University. Spent the next several years involved in gold dredging, tree planting, door-to-door sales -- basically anything which was outdoors. After this fling with the elements I started Computer Rescue Squad with several friends (and now fellow artists). We filled an important niche at the time and did very well.

In fact, I did well enough with my programming that in the mid 1980s I found myself suddenly in the possession of more money than I knew what to do with. Having a choice to either move to Silicon Valley and do the "start-up" thing or retire I said yes to option 2 and became an artist.

While my sense of responsibility toward existing client-base would not allow me the leisure of complete retirement, I did stop burning the programming candle at both ends to become an artist -- now burning the artist candle at both ends. ;-) I still support an existing base of programming clients and manage in excess of 400 websites. This aside I primarily consider myself to be a artist.

I find my writing falls equally between science topics, humor, death-n-dying, and science fiction. I suppose there is a little of all in each.

My work with sculpture has taken me into, through, and around many different media. For a couple years one would most likely find me with wire, sheet metal and tin snips creating mobiles in the lineage of Alexander Calder. Very educational and thoroughly enjoyable. Perhaps my most playful art form.

Partly as a result of efforts to recreate creatures from Calder's Circus I entered a phase of wire sculpting. Creating creatures, people, and abstracts from bronze, silver, copper, and stainless silver wire. Basically anything long and metal was subjected to my pliers. A truly enjoyable art form which is probably the most difficult of all to store and market. Just the kind of thing for an artist to play with long before the demands of production and gallery owners take their toll on one's time.

Next came experiments in formed-paper sculpture and carved wood. It was in the carved wood that I had my first break-through piece. During a brief period when I was mistakenly working under the notion that I was terminal I dedicated myself to finishing a particular piece based on sketches from a piece by Brancusi. I knew in my bones that if I did not finish this sculpture no one would. The vision of the form was given to me and to another the block of wood was just an over-sized yule-log. It was in these combined moods of service to the unrevealed sculpture and eminent possibility of my own impending death that this piece was carved.

Technically not my best piece, and not necessarily the show stopper that such a melodramatic setup might engender, still all in all this was the first time that I believe I hit the appropriate mood of an artist producing art for the sake of art. A trite phrase to be sure, interpreted differently by each person who says it and each person who hears it. Perhaps with a book or large chapter within a larger work I could explain sufficiently what I mean to narrow the margins of misinterpretation. But that's not necessary. The point here is not to convey the exactitude of my inner realization, not justify it as high-fa-loot-an. Rather, I'm just point toward an event which for me marked a point at which I ceased to be someone that did art stuff and became an artist.

After the various wood sculptures I embarked on what for me was to become a lifelong affair with stone. Starting first with a few pieces of alabaster donated generously from a friend I graduated to become a full fledged stone junky spending several thousand dollars on alabaster shipments. Fortunately my programming funded retirement allowed me this opportunity.

Most of my pieces from this early period are in the hands of collectors and since I didn't have the good sense to "spend a quarter" capturing a snapshot before shipping them off to their new homes, we'll have to await the eventual photograph from the collector's themselves. We've all heard the same horror stories about neglected catalogue photography and yet we've all persisted in the headlong rush to ship art without the proper pre-sale documentation. Who knows maybe the next generation of artists will be less neglectful of documentation.

In addition to being a handy source of income, and we all must eat, I find programming to be a creative outlet. Program code can be approached as a sculptural form. This is something I've enjoyed doing and have been blessed with enough of a geekish nature to do well.

I've dabbled at painting since the mid-80s. However, it wasn't until recently that I've taken the media seriously. Currently I'm exploring landscapes and taking my hallway series from early pastel days into new directions. One of these days an art critic will tell me what the heck my style is. Meanwhile I think of it as a little bit German Expressionist, a little bit Woodstock Impressionist, and a little bit rock-n-roll.

I love solving problems. I developed this proclivity as a physicist and have taken it further in my work as a programmer, web-designer, marketer, and screen-writer. As you may guess I've consulted in all four realms.

In case you missed the section on Consulting: I love solving problems. It turns out that game design is not too distant from physics and programming. It all involves establishing a set of parameters, presumptions, and what-ifs then letting them roll on into the future and see what the results would be.

Silver wire, ancient beads, a hammer, and an anvil... a perfect prescription for a grand afternoon.

In addition to designing games I love to play games -- games of all sorts board games, word games, video games, and most any type of game that strikes my fancy. These days my fancy is dictated by the demands of my work with Spiritual Gaming

As mentioned above, I've been spending a great deal of time working with the good folks at Spiritual Gaming. One of my jobs in this regard is press coverage of the industry. This includes the gaming industry, the spiritual industry and the cross-over spiritual gaming industry.

These so-called "miscellaneous art projects" may take the form of a $80,000 HO-scale movie set for Slimeworld and Bardotown, or they may take the form of a 20 foot cement leg thrusting from the ground in a neighbors garden. Or, this can be a subtle happening such as my ancillary "Bumble Barf" honey business.

For whatever reason I've always enjoyed the process of helping someone come from inspiration to actualization. Often we can supply for one and another missing pieces of a puzzle which are difficult for one and come natural to the other. This mixing and matching of abilities to make the impossible possible or the improbably come into being is something which I enjoy. And, it has served me well in the expansion of my foundation of talents. For example, if not for my willingness to use my computer skills in the recovery of lost scenes from a visiting script writer that knew more about cuts and fades than formatting, I may never have been put into the position of learning script-writing and movie doctoring in general.

Future History: If the past is anything to go by, which I believe it is, then my future is pretty indeterminate -- at least in so far as specifics are concerned. Most likely I will be eternally involved in one form of creative project or process after another. What the nature of that project may be, or what the specific manifestation of this creativity will be is left to see. I can tell you that I have a thing lurking in the back of my mind involving ancient toys. I would also very much like to tackle a monumental sized sculpture. Where this all goes we'll see.

As a physicist one learns that in order to refine an answer one must refine the question. Since this bio is obviously an answer to a problem any effort to refine the bio must eventually lead toward the refinement of the question(s) it seeks to answer. At this point I'm lost in a quagmire of possible problems. Is the bio supposed to convince someone of something, is it designed to give a reader insight into the individual, is it a marketing tool, is it a promotional device, is it a tool for definition..., et cetera, ad nausem.. and more et cetera? Let's keep it simple and if you have a question don't hesitate to ask. I can always add to the bio based on real life questions from real life individuals with real life problems to be addressed by something called a bio.

Meanwhile, hopefully the above will give some flavor and perhaps a modicum of insight into the personage Claude Needham also known as General Xxaxx.